Mr. Godin,
I would like to interview you for a documentary I am compiling exploring the evolution of purpose (personal, social, technological).  Actually, I would be ecstatic honored and quite possibly wet my pants if you said yes to an interview for my film.  It’s working title at the moment is “Life in Perpetual Beta“.  We have an interesting line-up of creatives, techies, life coaches, authors etc. that we are interviewing [ Sidney Levy, Nova Spivak, Dan Pink to name a few].  I think that your personal style would really kick ass and fit with our message. (ala Dan Pink “there is no plan” or Yoda “there is no try only do”  – how social networking and collaborative economy is changing the shape of society and shifting the way we think about work).  It may turn out to be the irreverent whorish bastard child of “the secret” with a heart of gold, thus making it world famous or it may just be another blurb that gets put up on Youtube, but all the same, I’d love to get a few moments of your time to interview you.  Please do let me know if you would grant me the honor of an interview.

In gathering information for Life in Perpetual Beta the book (common’ you knew it was coming) I looked through my old interview pitch emails. I didn’t know Seth Godin from Adam at the time to tell you honestly, but my tribe told me I had to have him, so I made an impassioned plea… was even ready to pee my pants… then had the audacity to mention honor… still hard to believe, I did eventually get the interview, You can see it here.

And when I say graphic, I mean the kind that involves swearing… a lot. Anyhow, I think I’ve got the DVD cover set for Life In Perpetual Beta, finally. 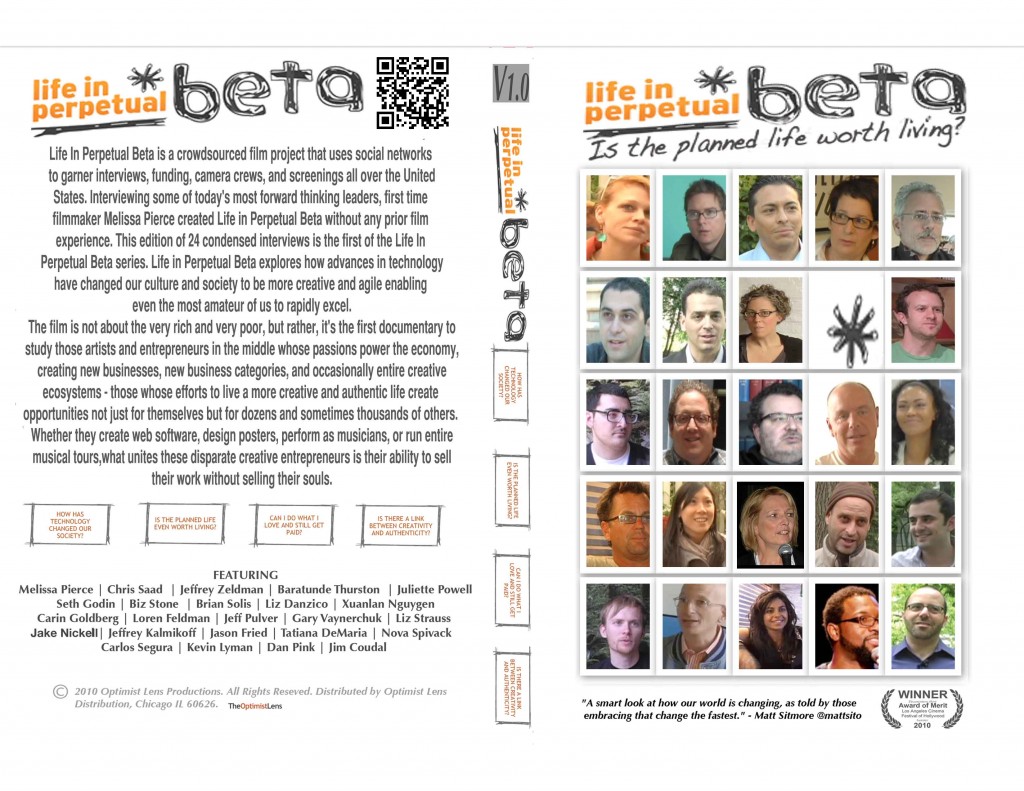 IS it finally done?

This is not something I would have chosen to write about but circumstances are unfolding in a way that makes it necessary for the truth to come out, and I’d rather you heard it from me.  I have had and continue to have a lot of great opportunities, and a lot of people have placed a great deal of faith in me, and I would hate for that trust to be tarnished in any way, this is by far one of the hardest things I’ve written about in my life.

In the Big Time

18 months ago, I began working as the community manager for a website called Biglife.ws. In theory, the site was a great idea, hundreds of coaches specializing in very specific niches attracting clients that were interested in that particular niche of personal growth. In practice however, it was quite a production to get the site functioning and teach the coaches about the importance of digital literacy. (I didn’t learn the terms community manager and digital literacy until much later, at the time I was “just helping out”)

In time, my work at Biglife was so valued that I was given part ownership.  In fact, Victory Darwin, the site administrator, was so impressed with my passion for empowering the coaches, that soon he and I were working on several projects together, one of which was Life In Perpetual Beta, only not in the form that most of you know it, in fact, the film didn’t even have a name then.

The film that Victory and I intended to make was primarily to highlight the coaches on our site,  I would create original content, and he would sell interactive spots to life coaches.  One could watch the movie and click within it to reveal some interactive element involving steps on how to achieve said mode of thinking the core content made mention of. Victory had some success selling the spots, although truth be told, I think the concept was a little too technologically advanced for most of the coaches we contacted – that and none of them had heard of paying to be in a film before, but Victory persevered.

Face Plant from 100 Miles Up

I’m not sure which of these things happened first, but the cumulative effect pretty much was a face first dive at 100mph firmly tied to all Victory’s loose strings.

My confidence was shattered, tucking my tail between my legs, I quietly quit as community manager at Biglife, warned the coaches, deleted my profile, my posts, and my videos all with the press of a button (This is why on LIPB there is no first Dan Pink video, it was hosted on Biglife.)

My first and last big time client at Think Without The Box Coaching and Consulting and I settled on a fair amount of services received vs. services rendered that I have yet to repay. (If you think the rock bottom face plant hurt, try having a karmic and financial debt you can’t pay back immediately follow you around.)

What hurt the most though was closing my coaching practice, I just couldn’t concentrate on my clients’ needs anymore. I had zero confidence, I was supposed to coach my clients to follow their gut instinct when clearly I had not been following my own.

A few months later I got a flurry of phone calls and emails informing me Victory Darwin had committed suicide. The entire Biglife community was in mourning. I somehow tracked down his dad, and amazingly enough, Victory was alive and well. Turns out, “Victory” was one of many online pseudonyms he’d used and killed off when his online persona was no longer believable, or when he was looking for publicity. I know it’s going to be hard for you to believe, but it was in that moment, even though I had cut off all ties with him months before, that my heart truly broke, and I saw Victory for the first time for the scoundrel he was. Certainly I’m not the only person who has  sullied their reputation and injured their pride by associating with Victory, I know I’m not the only person who didn’t want to talk about it. I’m sure he’s still out there, online, scamming some other sucker who, like me, will be too ashamed to admit she’d been had.

I’ve been getting angry hateful emails, blog comments, and phone calls for the last several months from people who were scammed, just like me, by Victory. And while I understand there is a price I have to pay for playing a game that I inherently knew I couldn’t win, I draw the line at threats and harassment. I’m putting this out in the open in the hopes of ending the harassment against me, helping other people in this situation and moving towards closure. I’m sharing this now because I finally have enough confidence in myself and my ability to move past it that I know it won’t destroy me to admit that I screwed up and am, have been, will be paying for it for some time.

Although no one died (at least, not in the literal sense) it’s with a heavy heart I write this post. Each time I sit down to type it out I feel completely powerless, embarrassed, and ashamed that I let it happen to me , after all, I am MRS. FOLLOW YOUR HEART,  certainly I would have paid attention to said heart repeatedly beating out the steady warning signals of impending doom.  In hindsight, there were a lot of red flags that I could have easily paid attention to, but I chose to ignore. And as much as it shames me to say, once in a while I don’t let my intuition lead, once in a while, I screw myself by ignoring the eureka of instinct just for the thrill of it, and this is a story about one of those times.

UPDATED POST  12/21/09 8:20pm –  I received this email from Victory’s personal email address two hours after I posted this, note that it’s signed “Brent” – possibly another identity. (I originally included it in the comment, but was advised to include it in the posting)

I was so disappointed to see your blog post about Victory.

Looks like you need a way out and this is the best you’ve got.

I still wanted to like you because you’re smart and funny and all, but this really destroys anything left that was good.

The lipb project is all yours. Own up to it.  None of this has anything to do with Victory.

You made a lot of slanderous statements and outright lies that can be proved to the contrary.

I’ve downloaded the source code and the screen capture of the blog.

Remove the names of the people and the websites and all the tags.

…actually, just delete the entire post.  That story just makes you look bad. I don’t think you realize how most people would read it. Just one big lame ass excuse for your failure.

If not, you’ve just created your worst enemy, and I’ll be happy to show you how effective I can be, both online and offline at settling debts.

It would simply be wrong of me to let this stand.

And as destructive as I will be, I’ll do it with love. I owe it to Victory.

I recently had a chat with a wonderful woman about what a success Life In Perpetual Beta had been up to this point for me and how I wanted to use it as an example for other women who were struggling with following their interests and passions. She listened thoughtfully, and said, “You Know Melissa, if it becomes a financial success, that would make it an inspirational story, yours is just a good start towards success”.
At the time, I was hurt, I was incensed, I was furious! Wasn’t the fact that I was following my passion enough? END_OF_DOCUMENT_TOKEN_TO_BE_REPLACED