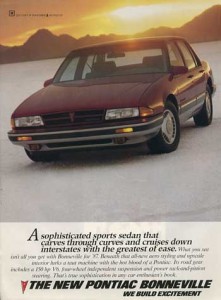 My parents went through bankruptcy… twice. When I was 11, I was keenly aware of the repo man towing away the family car, a gray 87′ Pontiac Bonneville. When I was 28, already far far away from home, my mother called to tell me that again my parents were filing for bankruptcy, this time however, no cars were repossessed oh-no, but their home was. My point is this, I learned about money from my parents, and presumably they learned the same way. I’m not blaming them, it was my choice to accept that attitude toward money and then repeat their mistakes, I had my own car repossessed when I was 22. I’ve known for some time I have skewed relationship with money, but only recently decided to do something about it. I love it money and I hate money. For me, money has always been a me against the man kind of deal, after all, it’s just a matter of time before someone comes and takes all I’ve worked (myself into debt) for away.

I get that this is a ridiculously unhealthy look at what money really is. Money after all is just a way to measure the value of goods and services, and I have that equation all kinds of screwed up. So, the question becomes, “How do I change my perspective about money and how can I be sure to pass on this more correct view of the stuff on to my children?”

A few things I’ve been doing:

What Have I Gotten Myself Into