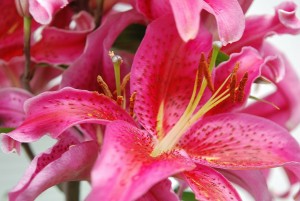 He hands you a bouquet of pink lilies, velvety soft beauties dripping dew. You put your face into the flowers to smell them, they lick your nose. He says “I’ve collected the tongues of all my lovers and arranged them just so.” You recoil as the petals move and wrap around one another.

You realize that until this moment you’d never considered what happens to lovers tongues when they aren’t loving you. You put the lover tongue bouquet in a decorative vase, fill it with water, and display it on the mantle. You enjoy the way the light hits them in the afternoon, mindful that one day your tongue will be a petal too, you hope for good light. 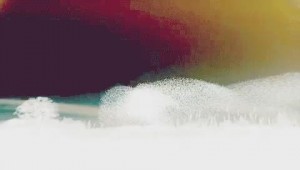 Starlings, like elementary particles, have their own spin and can react to other starlings’ movement in a less than a hundredth of a second. Information flows through flocks of starlings instantaneously which allows the birds to behave like fluid molecules at constant speeds.

Scientists would rather believe that starlings behave like liquid helium than that flocks possess empathetic or telepathic links. Starlings store their telepathy in the hollows of thief feathers. the smaller the wingspan the faster the bird the shorter the flight time. Thief feathers enable starlings to steal the dreams and emotional synapses of others in the flock, passing experiences back and forth. In this way starlings behave more like a writhing pile of lovers well past thinking or a sophisticated botnet army.

Did you know that panopticon surveillance fell out of favor around the same time scientists started studying starling murmurations? It’s a strange thing to think that the ornithologists studying starlings had a hand in the design of our current mass surveillance systems. But really, it wasn’t a leap from learning how starlings share experiences to collecting our experiences over a digital murmuration network. What’s most fascinating is you see the same failings between bird scientists and the NSA, tracking of data without understanding empathy.

National Audubon Society and the National Security Agency are anagrams in their acronym forms.

But I suppose I’ve said to much, haven’t I? Anyway, that’s what I know about starlings. I hope you have a pleasant day.

“Oh honey it’s 11.2 carats, for the first few weeks my finger ached from lifting it.” She looked tired.

They all said no thank you to the pastry plate. The athletes’ wives only drank their carbs and the artists wives could only afford the chicness of black coffee.

Shelia leaned in to the table and sighed “I’m lonely and my heart is breaking, this Faustian bargain is erasing my name.”

“Don’t be such a downer, Susan” the tired blond beamed.

There was a lackluster clink of their glasses. They all took another drink.