Me: “What do you want for your birthday?”

Me: “um, I’ll see what Santa can do about the brain donation, ok?”

5yr old: “We should study his brain too, that guy is nuts.”

Mr. Godin,
I would like to interview you for a documentary I am compiling exploring the evolution of purpose (personal, social, technological).  Actually, I would be ecstatic honored and quite possibly wet my pants if you said yes to an interview for my film.  It’s working title at the moment is “Life in Perpetual Beta“.  We have an interesting line-up of creatives, techies, life coaches, authors etc. that we are interviewing [ Sidney Levy, Nova Spivak, Dan Pink to name a few].  I think that your personal style would really kick ass and fit with our message. (ala Dan Pink “there is no plan” or Yoda “there is no try only do”  – how social networking and collaborative economy is changing the shape of society and shifting the way we think about work).  It may turn out to be the irreverent whorish bastard child of “the secret” with a heart of gold, thus making it world famous or it may just be another blurb that gets put up on Youtube, but all the same, I’d love to get a few moments of your time to interview you.  Please do let me know if you would grant me the honor of an interview.

In gathering information for Life in Perpetual Beta the book (common’ you knew it was coming) I looked through my old interview pitch emails. I didn’t know Seth Godin from Adam at the time to tell you honestly, but my tribe told me I had to have him, so I made an impassioned plea… was even ready to pee my pants… then had the audacity to mention honor… still hard to believe, I did eventually get the interview, You can see it here.

I have lived in my apartment for nearly five years, it’s the longest I’ve lived in any one place in my entire life.  Each year the lease comes up and I think, “This is the last year I’ll be here.”  One of those years I recall refusing to sign the lease, preferring the security a month to month arrangement would afford an on the move gypsy like me.

I’ve come to know myself as the woman content to hang my towel on a rented towel bar, never put my name on the mailbox, satisfied to leave the walls standard issue landlord white.

I do try and keep the floor swept, wipe the counters down, and make an effort to keep the bedsheets tucked in tight, it’s not that I’m a slob I’m just uninvolved. I’m a non-committal inhabitant, itching to move away anytime one place starts to feel a little too much like settling.  It’s not that I mind settling *in theory* (I fantasize about it all the time) but I haven’t really ever had the inclination to practice.

Today however, I had the inclination to paint, so I painted just one wall of my kitchen. Then I put up two shelves and hung three framed Hatch Show Prints. I really don’t understand why it took me so long to do it, I’ve been dreaming about wiping out that smugly austere landlord white for at least three of the five “why bother” years I’ve been here. It took all of three hours to accomplish. 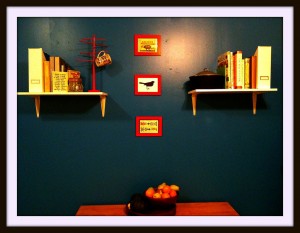 Tomorrow morning, I’ll sit down at my kitchen table and hold a cup of coffee, or tea, or whatever my gypsy heart wants in that moment, and I’ll look at that one wall, my wall, and I’ll take a sip, maybe two, and I’ll tell myself “That settles it,” and it will, at least, for one more year.

Last year, I read about this incredible event a gentleman named Jim Haynes has been hosting in his Paris home.  Every Sunday night for the past 30 years, 30-40 strangers reserve a spot at Jim’s table and attend a feast, it’s a first come/first serve system where a different friend prepares the feast each night. After I read about Jim, I vowed to be more like him, inviting more strangers and more adventure into my life… the year passed without much of either.  Last night however, Cole and went to a dinner party at the home of a couple we had never met before, and it was wonderful.  Weirdly, the invite had actually come as a friend request on Facebook, the couple had just moved into the city and found me through a series serendipitous social network connections, and were quite frank in their invite that they wanted to make new friends in the city.  I admire the way these two weren’t shy in culling us out into the real world. How very different they are from most of my Chicago friends (whom I still only know in the ether of the internet.)

I remember being known as the woman who walked across a crowded room to meet new people, what ever happened to her? I’m totally bringing her back this year. I hope you cull out a little more social too.