Obama won the election! While I’m not particularly surprised in this,  I am elated that he’s been elected. SO now that we’ve elected an African American our news sources are telling the story of our country’s long struggle with race. I can’t turn on the radio or TV without hearing about the plight of the black man, from slavery to the civil rights movement to an African American president elect. And that’s the way it should be.

The constant hum over the last few days about slavery and overcoming great obstacles got my wheels turning as I remember having conversations about race with my mother.  She was concerned when I wanted a black baby doll at 6,  and distraught when she realized my first crush was for Michael Glover, a sweet skinny black kid at Tillicum Elementary School who was in Mrs. Conway’s 3rd grade class with me. (Mrs. Conway called her about the huge purple card with a big pink heart that I put in his desk)

My mother sat down with my 9yr old self and told me how hard it would be for my children if I married a black man. For the record, I thought she was crazy, too young at the time to grasp such complex things. I’m not implying that my mother was/is racist here, I’m saying I think she spent a great deal of time trying to protect me from what she perceived as the harsh realities of the world, it’s just what mothers do.

I remember one conversation in particular with my mother when she told me about some of our ancestors who owned a plantation in Tennessee that is now a famous landmark.  I think she was trying to let me know that our family came from money, or maybe impress upon me the importance of genealogy.  But what I wanted to know most is if they owned slaves. Every time I asked she would say she didn’t know. It struck me yesterday, as I went through the emotions of the gravity of Obama’s victory, that perhaps again she was doing her best to protect me from the the pain in the truth, so I did a bit of research, and yes, we were slave owners.

My heart sank, broke into pieces, and the responsibility I felt for the actions of my people pressed down on me.  The weight of the world settled onto my shoulders.

How did I finally find this out? Not mom, not dad, not grandma, I used Google’s book archive of course. I looked up what I knew of the plantation and followed the clues from there. The print is hard to read on this clipping, but basically states the dates and times of the sale of the mansion. Turns out the DeVaults (my maiden name) bought the property from the Massengils and then sold it back to the Massengils exactly 100 yrs later.

*Note, it seems appropriate to me that the Massengils are the same family that lends it’s name to Massengils Douche, as that’s how I see all the owners of the “properties” listed below – douche bags. 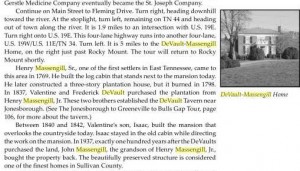 From there I looked up Isaac DeVault, and found this:

How could anyone I even remotely be related to ever think it was ok to OWN a human being? (How could anyone at all think it is ok) I realize that we have come a long way in the way we think about many things, for example, bloodletting to cure mental illness was quite the standard just a century ago, but this! Like many of the people I spoke to about this issue, I felt like perhaps I should have just left it at “I don’t want to know”, so that I could suffer from some mild delusion that my people thought differently, were benevolent, were forward thinking, were the purists of existentialism.

But I didn’t, and now I know, and I am crushed to think that my prosperity (which isn’t much admittedly) was literally built on the backs of someone elses horrible misfourtune. (I don’t think that is strong enough language, I just don’t have the where with all to think of anything more presise and less beligerant that what is in my heart right now.)

Who were these people my family thought they could own? What happened to the SIMS born into slavery on Isacc DeVault’s plantation? Where is that family now? And if I find out, how do I ever express my horror, my regret, my deepest shame that anyone, much less anyone related to me, could have ever ever ever done such a thing to another human being.

Maybe my mom was right to shield me from the ugly truth, or maybe she really didn’t know if our family had owned slaves or not, or maybe she didn’t want to know.

But now I know. What do I do with that?